Alternatively titled, “How to Stop Yourself From Climbing Walls in a Lockdown”.

So, Germany finds itself in the midst of yet another lockdown, though to be honest, it’s all pretty much the same to me. The option to work from home has been on the table ever since this whole pandemic started. I’ve always worn my face mask, always kept physical distance, and only rarely ate out, even in the distant pre-Corona era.

The only difference to me are the reasons I have for biking. Whereas in the summer—with the temperate weather and considerably loose restrictions—I had an incentive, a destination to bike to more or less, I have no such thing in a lockdown. In fact, it is even a disincentive to go outside my apartment, even when the sun is just splendid. 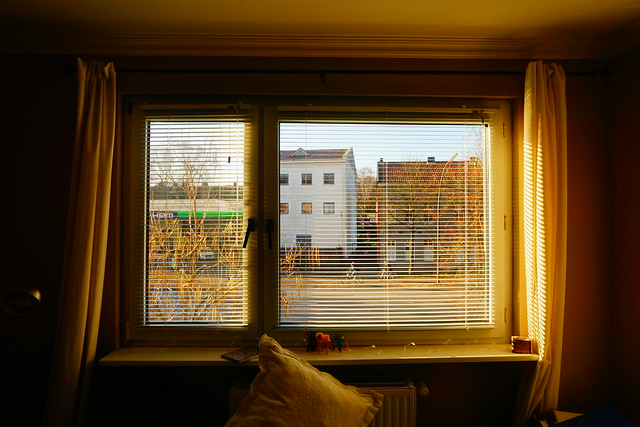 Luckily, my interests are particularly suited for membership to the Couchpotato Verein. Aside from the handful of books that I’ve acquired since moving into Germany and my ever-growing Netflix watch list, I’ve also been improving my German (and learning French and Swedish), blogging a lot more than usual (this is the fifth post this year, infinitely more than last year which had none), as well as discovering some new toys to occupy my time.

I’ve figured out that the trick to keep me from climbing walls is to indulge my curiosity. One thing I really liked as I moved to Germany is just the sheer amount of new things I learned. There’s the typical cultural learnings that’s part of the trappings of moving to a new country but I also had to learn a lot of new things from my job1, learned new martial arts (still striking though), and, heck, even learned that I can cook. Yes, you read the last bit correctly.

Who would’ve thought making instant noodles at 2AM in the Hacker House is good practice to make stuff like this?

I have, of course, already told you about my bike. For bike enthusiasts it’s not such a jaw dropper but nonetheless this is the first bike I owned to have multiple gears (the last bike I “owned” was a BMX way back in elementary school). It’s relatively simple but I still enjoyed learning about how to use the gears, and learning about maintenance. That said, I still use my bike mainly for transportation and leisure, any exercise I derive from it is secondary. 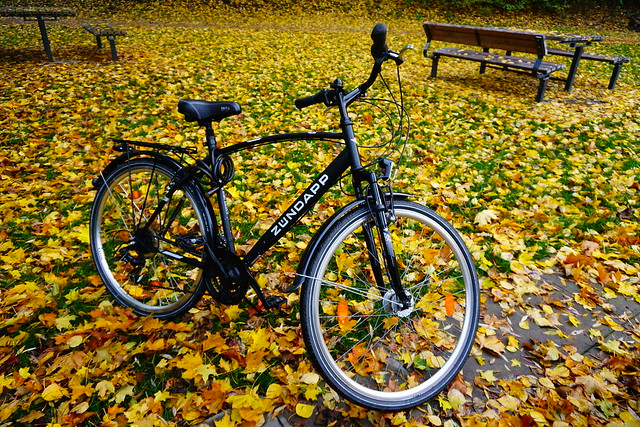 I have, by the way, aptly named this beautiful bike The Adventure Time.

I kinda fancy that biking is my exercise to keep my road awareness on-point. I still don’t know if I would want to get a German/EU driver’s license; the public transport is good enough for me save for a few cases where I would just book a taxi. But boy do I miss the zen experience of a good, traffic-free road.

Like a bike, a guitar is something I’ve long planned to purchase but kept putting off. I’ve told myself that I will purchase one as soon as I’ve settled into an apartment that’s more or less permanent for me. And yet, I just never did. I was too busy with other things and my fingers are too shaky anyway from going to town on sandbags in my Monday Boxing classes.

That last excuse was naturally invalidated when Zanshin Dojo had to close due to the Coronasituation2. As luck would have it, the first Facebook Ad that would actually interest me is an advertisement for the absolutely beautiful Yamaha Silent Guitar.3 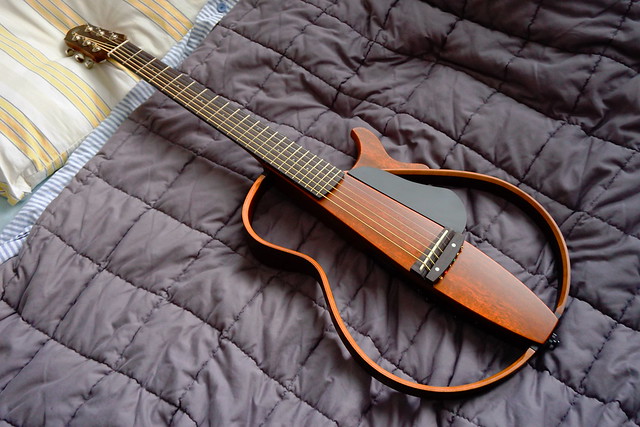 Hey sexy you’re going a bit too fast. We’ve known each other for a short while and you’re already on my bed. 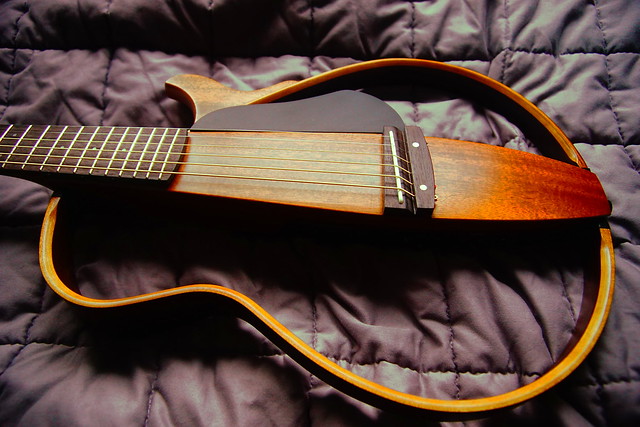 Anyway, needless to say, I’m in love with this marvelous piece of engineering. For anyone who asks whether this is acoustic or electric, the answer is: yes. I have no idea and I don’t care. Such is love.

What’s really nifty about this is that I could plug my headphones in it and play with bass, treble, and reverb effects by turning knobs on it’s control panel. It will be dishonest to say I don’t find the user experience oddly sexual.

Also, as a corollary to this purchase, I have finally purchased noise-cancelling headphones for myself. For so long, I have been patiently mending the broken joint of my Sony MDR V55 and even adapting my usage to keep it serviceable as much as possible (the cans are still good, it’s really just the broken joint), largely due to sentimental value. But now I’ve purchased a Sony WH-1000XM3. I have no idea why I put off buying noise-cancelling headphones for this long4; listening to music with noise cancelling definitely counts for a religious experience.

Although to be honest, I’m not too confident with my guitar-playing skills. As such, I’ve never really splurged on it because I feel like my skills still can’t justify the expense. This is why the guitar I have in the Philippines is the least fancy of acoustic guitars; it doesn’t even have a built-in tuner! I could only justify this recent purchase because it is such a beautiful specimen of an instrument.

It’s this same austerity, the same high-standard I set for myself even when just self-learning, that I’ve put off buying a Wacom tablet for years. Ever since I’ve had my own disposable income to spend on my hobbies (computers, cameras, telescopes), I’ve contemplated getting a Wacom tablet. But same with my guitar, I fear my skills are not at that level where it can be said that I “deserve” a Wacom tablet.

I’ve come to the conclusion that this is a bad side-effect of my college education. It has ingrained in me the idea of “prerequisites”, that you can’t tackle an advanced topic (like digital art-making) if you haven’t passed the foundational class first (like basics of drawing on a paper). There is certainly some wisdom in arranging a curriculum as a directed acyclic graph but, outside the ivory walls of universities, life is just not so. Much of human progress is built by people who tried to do things before they were even certain they were ready.

I think higher education should somehow take this into account. I believe this will also address the perceived lack of creativity plaguing university graduates today. Boy won’t I make a good teacher.

Anyway! I’ve digressed too much. The point is I’ve finally decided to give myself at least a passing grade in Basics of Drawing on a Paper, and bought a Wacom Intuos M Pro tablet. It was also on a big discount for Black Friday. Are you seeing a pattern here?5

I’ve been with the Wacom Tablet for a few weeks now, enough for a few sketches. Cognizant of my own weaknesses, let me give you the museum treatment through my portfolio gallery! 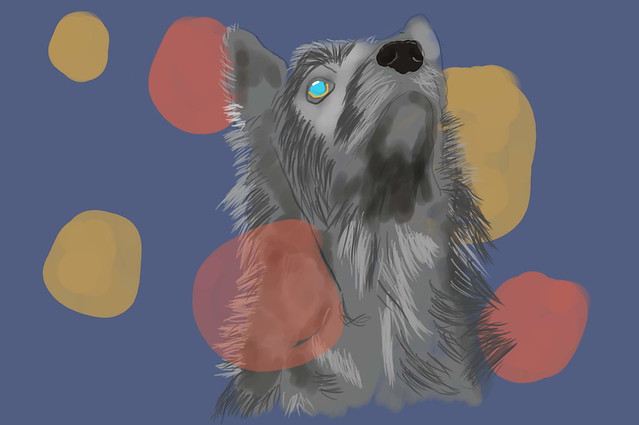 For my very first digital painting I drew my dog Newton, here stiff and wondering how long must a good boy sit before you can call him a good boy? I drew it on GIMP, after an absolutely hair-tearing session trying to install Wacom drivers on my old-but-supposedly-still-supported Ubuntu 16.04.

After which I did a bit more research and came upon Krita. So I decided to give it a try for my next act which is…

Embrr! Also known as The World’s Most Disciplined Dog, here striking his most dignified dognified pose.

There’s quite a bit to unpack in here:

Despite being the Hacker House Dog for most of my stay in Kalibrr, Embrr is not actually the first of the Hacker House Dogs. Before Embrr, there was a couple of dogs, a couple in more ways than one. To keep the content of this blog PG-13 (I think I’ve already hit my quota with my guitar innuendos above), let’s just say that they are friends for always! Behold Einstein (the shih tzu) and Pi (the beagle), or, as I refer to the pair, PiEnstein. 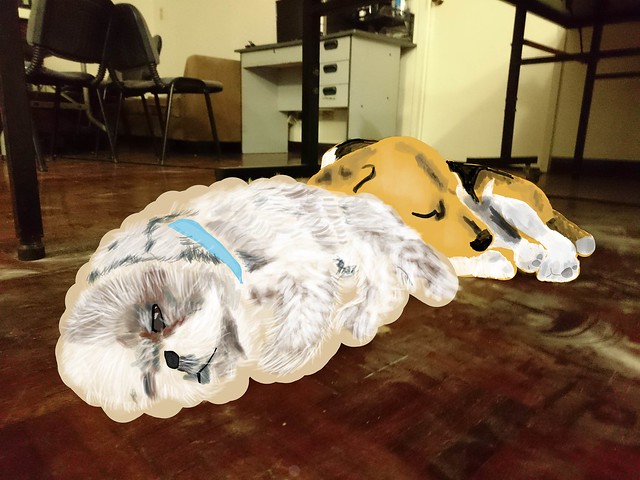 Oddly, the richness and depth of Einstein’s fur was way easier to draw than Embrr’s simple, monochromatic coat. I obviously did not intend for this piece to be a “complete” scene as I present it here. But I was really pleased with the outcome that I just arranged it so. 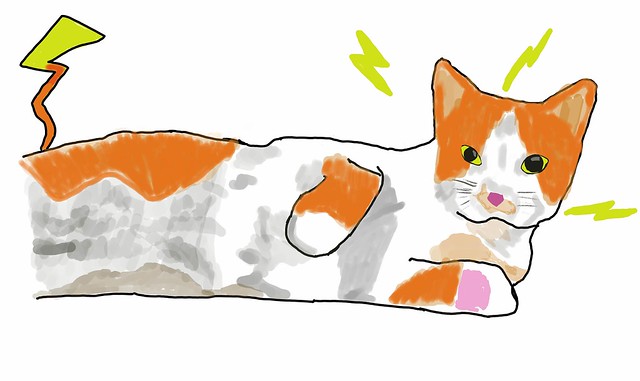 Next up is Jake the Dog, a female cat, who has since just been affectionately referred to as Jakey. You would have to find Cassandra for the full story behind the confusing name. In my head I have Germanized it to Jakey von Katzendorf.

She was a stray rescue, with a kinked tail, and so we sometimes call her Pikachu. She’s also fat so when she sleeps, I call her Snorlax. 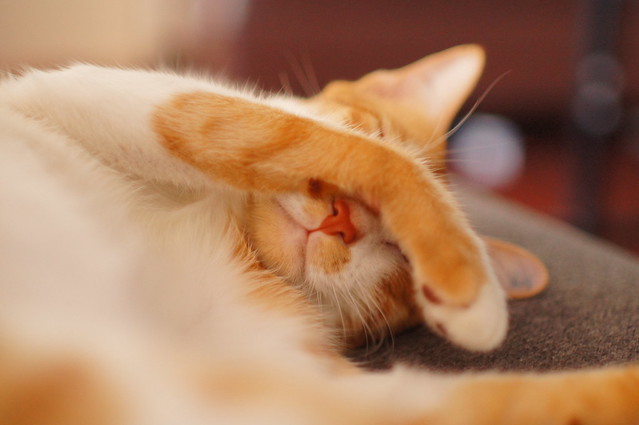 In case the name really bothers you, well, yes, I can confirm that she takes hers after the second protagonist of Adventure Time, whom I’ve also taken as my spirit guide. I didn’t have a hand in naming her though; it’s pure coincidence that our paths crossed. 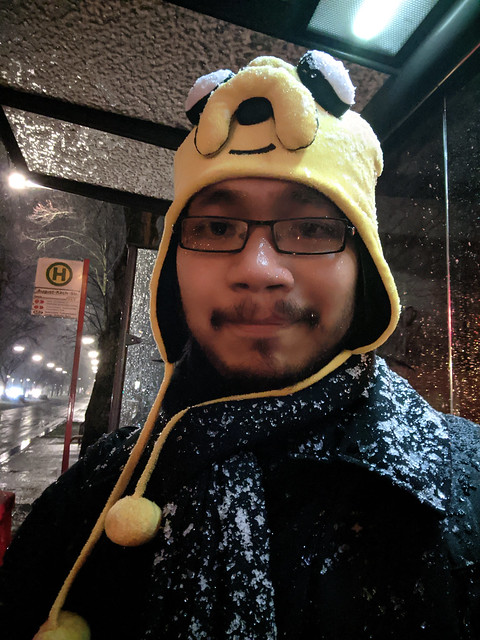 Yep, it’s me, and yep that Jake the Dog.

At this point I think it’s a good idea to talk about how I evaluate my art skills:

I’m hoping that with the Wacom, I could workaround (and even overcome) my weaknesses. It’s looking good so far. I have often wished, after judging that I’ve drawn an eye a bit too small in relation to the rest of the face, and yet at the same time already too detailed (what a nightmare!), that I could just select the eyes and scale as if in Photoshop. Doing exactly that for the first time in Krita just felt extremely satisfying.

Which brings me to the second part of my exhibit, portraits.

I’m currently working through some personal projects right now (which involves line art, lots of line art) so, unfortunately, I haven’t had the time to digitally redo a portrait I’ve drawn on paper; for such exactitude, Embrr would have to suffice for the meantime.

Nonetheless, here’s an example of a portrait I did earlier this year. I have been trying to develop a technique with a mechanical pencil. 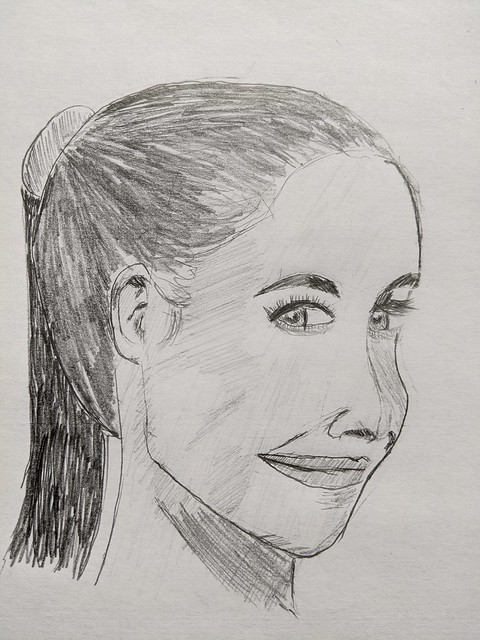 Here’s my first human attempt at a portrait on Krita. 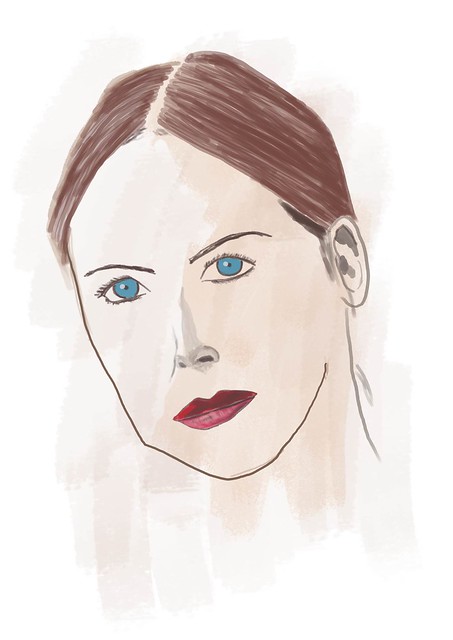 I was attempting for a less detailed style, with more emphasis on light. Almost impressionist. Unfortunately, having seen face-masked people for most of the past months does not help my weakness with noses and jawlines.

But actually, I should be thriving in an age of face masks; a pandemic should be a boon for my artistic career! It literally covers the parts of the face that I am not good at! 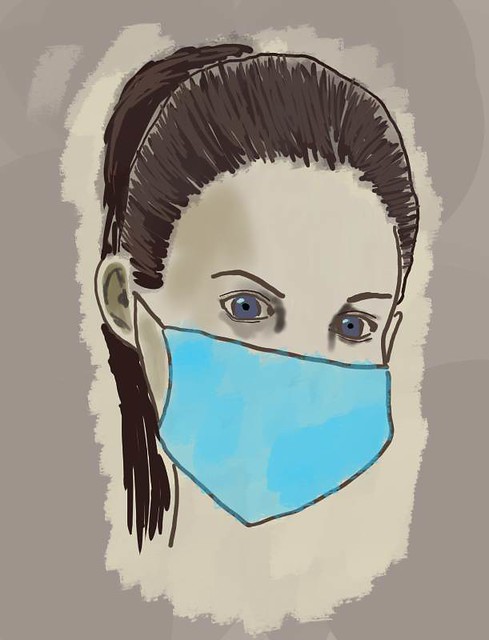 I find you can be friendly with just your eyes.

That’s it. If you’ve read this far thanks for staying with me. I think I wrote this blog entry just to prove to myself that I haven’t wasted my time in lock down. I would’ve wanted to add more images, more digital paintings, but I’m still working on them on top of other things.

Wait, actually, there’s another one… 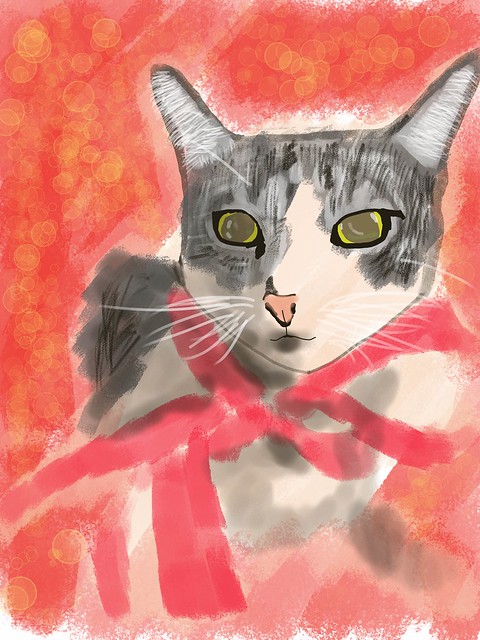 Luna wishes everyone a Very Meowry Christmas. She also wants you to know that she has totally absolutely nothing to do with the fallen Christmas tree. She says you shouldn’t worry about the gifts rather just be thankful that she didn’t have to use one of her lives on that unfortunate incident.