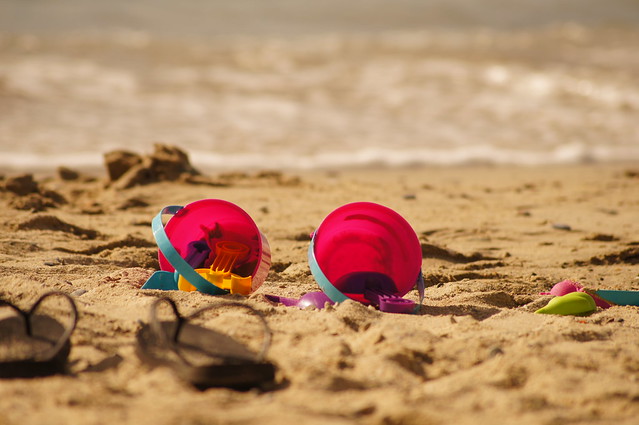 The year is 2015. A handful of months fresh from a change of jobs that was, safe to say, not planned as thoroughly as I would have preferred, I (along with my sister who tagged along) joined a curious crew into the beautiful beach of Puerto Galera. This small vacation was both a temporary respite from the sweltering summer heat and an item of curiosity off a pipe dream bucket list. For as long as I’ve started taking an interest in photography I’ve always looked up at the night sky wanting to capture what my eyes saw and maybe even more.

Fast forward to 2018, a trip/adventure that I thought I would only make once has been a more-often-than-annual reason to take vacation leaves. I’ve met some very interesting people, some of them even became friends that I wanted to personally say goodbye to, given my then-looming departure for Germany. I have photographed the beautiful sight of a galactic core from the vantage point of a fringe planet several times—might as well be countless, considering that I thought I would only see this once, maybe twice. 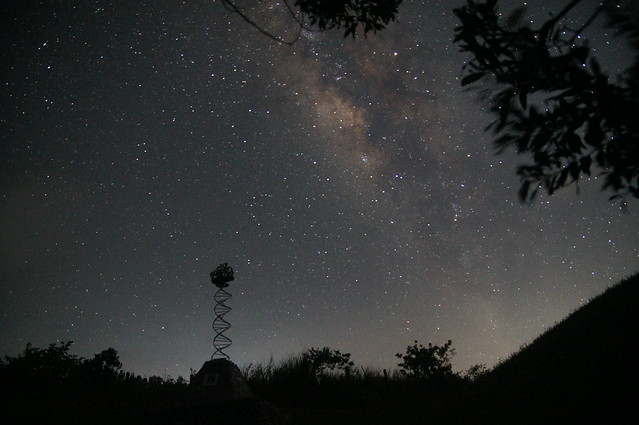 And to my friends and coworkers, I’ve become that guy with one eye always at the night sky, who can be excused from immediate replies if there’s a super moon on the horizon, and who, with a bulky telescope, prove the science schoolbooks correct. Mars is red. Venus is beautiful. Saturn has a ring. Jupiter has spots, streaks, and satellites. 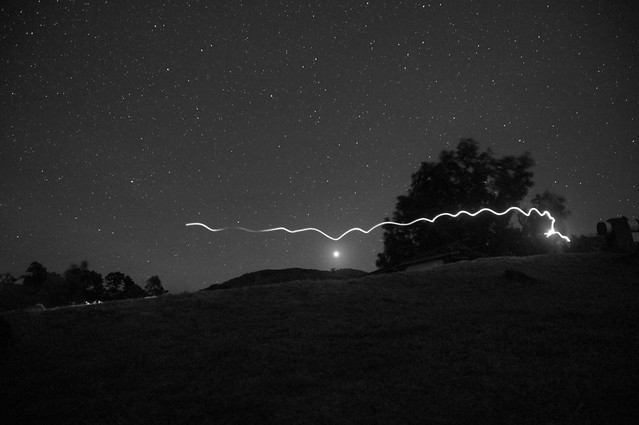 I remember in January of 2018 when a rare and curious phenomenon graced the Philippines: not only was it a super moon, it was also a total lunar eclipse. It was, of course, something I would not ever miss. What I did not count on was my reputation preceding me at work. In a few Facebook messages, Abie has persuaded me to organize a viewing for anyone else interested in the office.

Despite my aversion to coordinating logistics for just almost anything1, from a heap of inputs and suggestions, I’ve managed to scrap together a workable plan and conveyed those spur-of-the-moment schemes into instructions people could follow.

The night of the eclipse, the taxi we booked was unfortunately stuck in traffic so we had to walk to where he was to save time. On the radio the news broadcast covered the eclipse as it started to take place. We finally arrived at the park about an hour or less away before totality. It was crowded and festive in the pleasant January evening air; we might as well be shooting a music video for Toploader’s Dancing in the Moonlight.

After finding the group of my coworkers who have arrived earlier I prepared to mount my binoculars to my tripod. I remember saying out loud to no one in particular, “I am not prepared for this”.

“For the eclipse?” asked Aser.

This will sound kitschy as a German garden gnome but seeing the moon in shades of red is like seeing your lover on your wedding day2. You already know she’s beautiful but seeing her made up and extra pretty just for this one day is sweet intoxicating infatuation all over again.

As I expected, a crowd of strangers queued up to have a look through my binoculars. I normally tend to introversion but I love sharing and talking about things that make me wonder and smile and even more so when my audience appreciates why I am in awe and wonder. Needless to say, I think this passion for the sights of dark and clear skies is something I managed to convey that night. 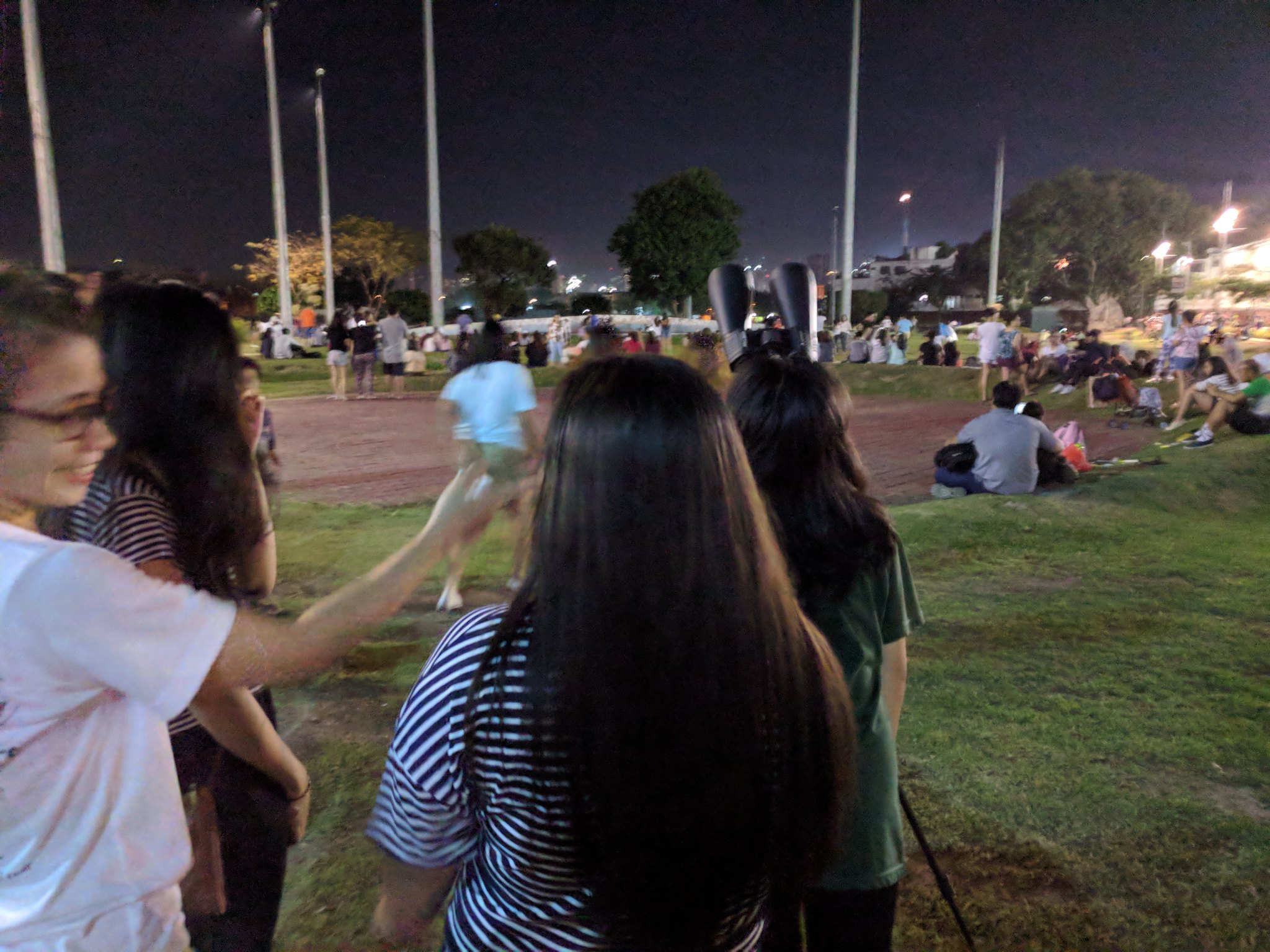 Uncharacteristic of me, I did not get to take a lot of pictures that night. The reason being, this was still several months before I bought the compact A6000. By then I only had the A35; though already small for its time, it just doesn’t compare to the new generation.

Moving to Germany, I knew that I would leave more than just my astrocamping gear behind but also friends and this loose collection of acquaintances that’s become an astronomy family/club to me. 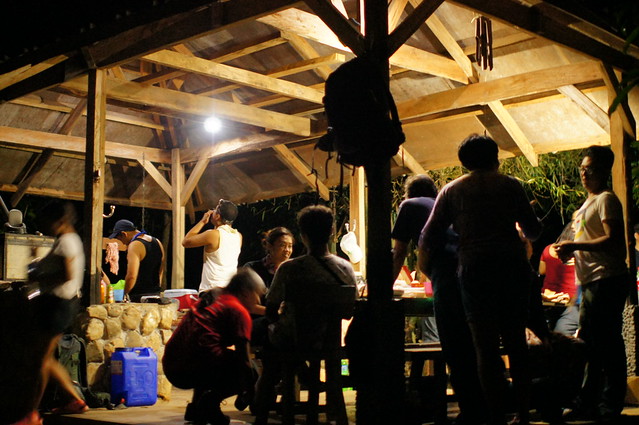 Still, you can strip a man of all his astrophotography gear but you can’t strip a man of his passion and resourcefulness. One of the first photos I took after arriving in Hamburg is, predictably, of a beautiful spring night sky. 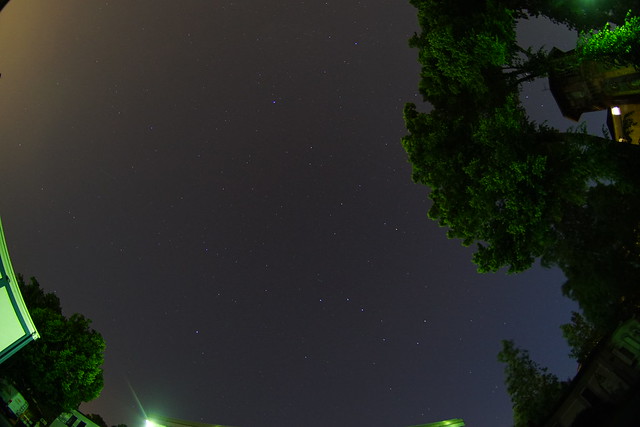 That’s taken without a tripod and in the still-bitter cold of a Northern German June night. Not bad I would say. Not at all.

Hamburg, for all its virtues, is just not ideal for astronomical observations, unfortunately. In the spring/summer when the skies have slightly better odds of being clear, the days are long. In the autumn/winter, when the nights are an imposing presence even over people’s moods, the weather is cloudy at best.

Still, you make do with the circumstances. Experience so far suggests that spring is the best time for observations in Hamburg. For all the bad things that transpired last year, there were two astronomical events that I was able to observe.

The first is the conjunction of the lovely Venus with my favorite asterism, the Pleiades. 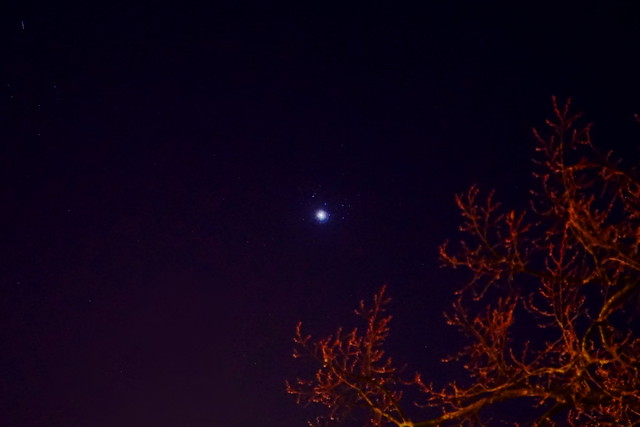 This was taken from my apartment’s window, blown up and post-processed from a 50mm f2.8 shot. I did not use a tripod and this would not have been possible if my unit’s heater was not directly under the window.

The second one was harder to observe and not only because of cloudy Hamburg nights. It was also fainter and the lines of sight from my apartment did not afford a direct view into this beauty. For what it’s worth it was visible for far longer as it was no mere coincidental conjunction of sky lights—though I only actively tracked it for almost a week . But for the whole time it was visible, it was also “moving” at least faster than usual for celestial objects.

I am talking, of course, about the Comet Neowise. 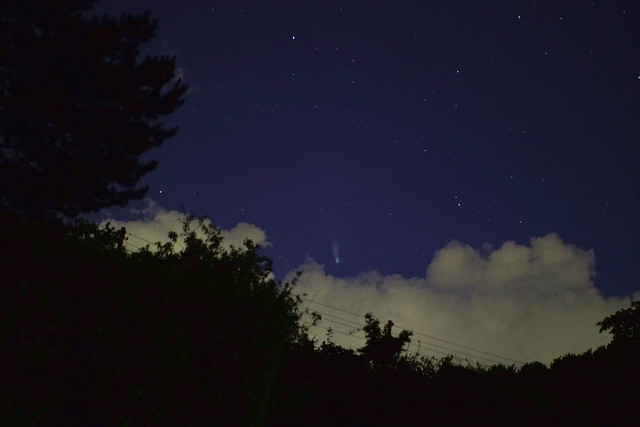 Hunting Neowise in late July meant that I had to take some very late-night (or early-morning, depending on how you want to frame things) bike rides. And then staying out in the cold night alone in a dark Stadtpark Eimsbüttel, with only my hoodie jacket. I even feared that I might be mistaken as a vagrant, and would have to explain myself in German (“Herr Polizei…leider habe ich kein Deutsch genug für eine Erklärung.”) but then what vagrant has an interchangeable-lens mirrorless digital camera and a bike with a smartphone for GPS guidance?3

That Neowise moved across the skies4 also meant that each night I tried to shoot/observe it, I first had to track it, a task that ate into the precious little hours of darkness—not to mention the precious few minutes of cloud clearance—that I had. In the picture I took above, you can already see the clouds creeping up on my view. I planned to take proper long exposures of this—I even borrowed a tripod from work—but I just never had enough time. Thankfully, I can stabilize myself pretty well and the A6000’s sensor is fantastic at low light to say the least.5

It’s not the picture I envisioned I would take but it’s something. At least until Neowise returns after roughly 7000 years.

In the midst of perhaps my busiest spell so far in my current job, another lunar eclipse happened in the Philippines last Wednesday. I wasn’t even aware of it; the first time it was brought to my attention was while my family was attempting to set-up and use Koopman-Hevelius, the German Equatorial Mount Telescope that I left in the Philippines. 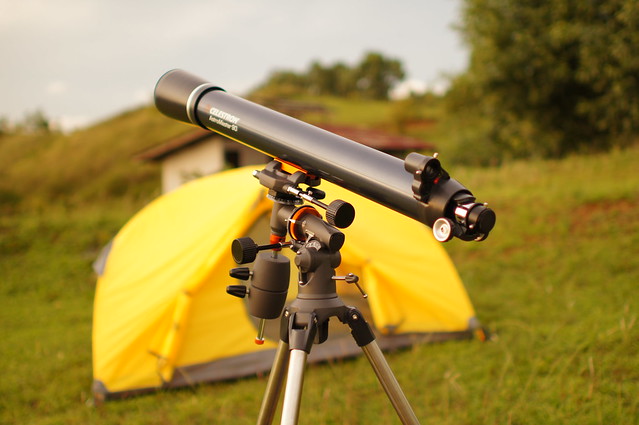 I was actually rather indifferent to missing an opportunity to witness a lunar eclipse. Perhaps to my mind I had bigger fish to fry in the form of the tasks queued up at me at work; the past couple of weeks hasn’t exactly been smooth-sailing and a timely long weekend has been my only opportunity to decompress.

Imagine my surprise upon seeing a message from a friend telling me they took a picture of the eclipse for me, because I wasn’t there, and sorry they only had a phone, none of the fancy gear I might be used to. A touching gesture as much as it was unexpected. In the crazy reality that’s started in 2020, it’s also quite a nostalgic reminder of times gone by.

I subscribe to the idea that people won’t remember you for what you said but for how you made them feel. That’s why I always try to acknowledge even the smallest gestures of kindness. From a random “Hi” while I’m queued up at the grocery cashier with a heavily-bandaged left arm pushing my grocery cart to taking a picture of an eclipse so that I can see it even if I wasn’t there. They are all very appreciated and I want you to know, you lifted up my mood.

Here’s to the kindness of friends and of strangers, who are just friends we haven’t made yet.

2 thoughts on “Stars and Friends”