Slowly, the Scorpion emerged from the horizon, into the heavens, just in everyone’s plain sight. It was gigantic, with burning orbs for pincers and armor; in the night’s darkness the Scorpion was unmistakeably recognizable. The Moon has long set and the Hunter has been gone even longer. The sky was for the Scorpion to crawl.

We lay on the white sands waiting for the Scorpion to reveal itself entirely. First came its pincers. Then its long body with its burning red heart. Then its tail, the stinger. But it was not really for the Scorpion that we waited hours for. Near its tail, as if stuck with its stinger dragged around as the Scorpion prowled, is a sight more beautiful, more majestic than a celestial scorpion—a sight I have made it my life goal to see. At the end of this particular Scorpion’s tail flowed forth not poison but milk.

Fun fact: Being that our Solar System is located in one of the arms of the Milky Way, we can view part of it from our outpost here at Planet Earth. As our night skies stand presently, the Milky Way is situated at the “tail” of constellation Scorpius; should you let the myths have their way, also known as Orion’s archenemy. As an additional marker, the Milky Way flows from the teapot asterism in the constellation of Sagittarius.

(So does the Teapot coat the Scorpion’s tail with Milk? Or is the Scorpion pouring Milk from its stinger into the Teapot? Is not the Teapot a Milkpot maybe? Is Sagittarius trying to avenge Orion? Reader, I leave you to decide.)

In case it is not yet obvious, I have been a fan of astronomy all my life. In fact, one of my main motivations when I got myself an expensive camera (the SLT A35) was to photograph the night sky. Much so that I christened my A35 “Getsurikai”—a BLEACH-inspired name which translates roughly to “moon grasp”.

Alas, contemporary life is not exactly friendly to night-sky shooting. Add the fact that, as a hobby, I only get a handful of chances throughout the year to try out my experiments. My progress in this interest has been slow.

I’ve experimented more than a few times just to learn how. I have tried it on the kit SAL 1855 lens when I bought a tripod. Needless to say, my attempts—done from our rooftop on the darkest nights our area will allow (which still isn’t that dark by the way)—ended with faint, out-of-focus traces of Orion. Else, you would’ve heard from me before now.

My luck proved better with the SAL55200. At 200mm focal length, shooting the moon became quite doable. That, combined with my XPeria Z and my Celestron 70AZ (codenamed “Lippershey”) produced some images I’m quite proud of.

And suddenly, Getsurikai started to live up to its name.

But I wanted more! I wanted the stars. “Aim for the stars so if you miss at least you hit the moon” right? Well, I’ve somewhat hit the moon. I want my stars.

What gave me the idea to use the 1650 was this shot, taken last summer. 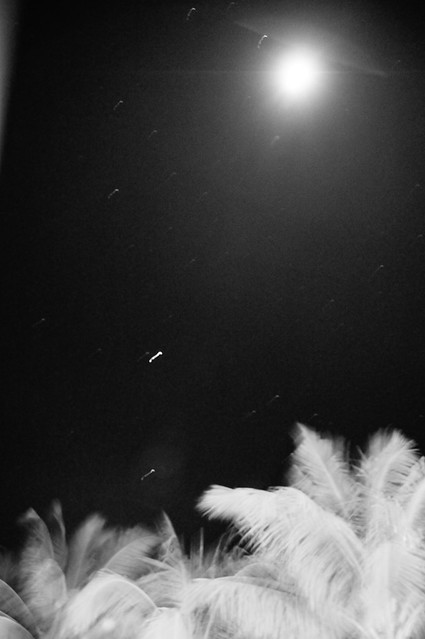 Compared to the other shots in this post, I know this one does not offer much merit. But look: it got a few stars and one planet, sharper than I ever got them. And that is with all the light pollution from where I stood and with a shining moon to boot, not to mention the exposure time of a mere 5.7s. If that does not win any photographer’s faith I don’t know what will.

But still, the opportunity for dark and clear skies has yet to present itself.

Until a few weeks ago.

Say what you want about the Philippines but we have a friggin’ Philippine Astronomical Society (PAS). I’ve been lurking in their group for some time now but I never really got the opportunity to join one of their events. That is, as I’ve said, until a few weeks ago.

In PAS’ 2015 stargazing event at Puerto Galera, I finally got this shot. What it lacks for in exposure, it makes up for in photography lessons learned and sentimental value. I dipped my toes in the hot sands of Puerto Galera not expecting that I’d have an appointment with the lovely Milky Way, wearing stars for jewelry.

In a moment of trial-and-error, I realized what I have been doing wrong all this time. Ironically, what got my ass is the fact that I tinker with my camera’s settings far too much. I should have left my white-balance at Auto. Color-correction is really no help here.

And of course, repetition is what builds skill. Fortunately, PAS held another stargazing event barely a month after the one at Puerto Galera, this time at Big Handy’s Grounds at Tanay, Rizal. And I got this shot which will now always keep me in awe and wonder about things way larger than myself.

(Mandatory disclosure: I almost did not get this shot because, again, I tinkered with my camera’s settings too much! This time around, the culprit is my aperture setting.)

Of course, these adventures have more stories than what I have just related. I’ve met some interesting people along the way but they don’t make it into this story as that risks making the narrative incoherent. Maybe, someday, I get to write about that and them.